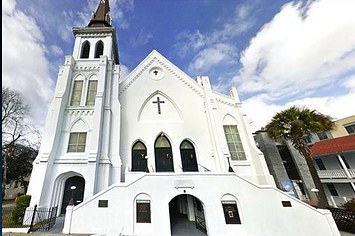 Charleston, South Carolina. June 17th. 9:05 p.m. Twelve congregants gather for prayer and the reading of God’s Word at Emanuel Methodist Episcopal Church. A 21 year old, white, sandy-blond haired man walks in, sits down, and begins to speak with Rev. Clementa Pinckney. They begin to argue, and he stands up pulling out a .45 cal. pistol, aiming it at 87 year-old Susie Jackson. Jackson’s nephew, 26-year-old Tywanza Sanders, tries to calm him down. The man replies, “I have to do it. You rape our women and you’re taking over our country. And you have to go.” Sanders moves in front to protect his aunt, heroically acting as a human shield. He is shot first and drops to the ground. “Y’all want something to pray about? I’ll give you something to pray about,” the gunman cries, shouting racial slurs. He proceeds to pump dozens of rounds into people there. He has to reload five times to continue the premeditated carnage.

The suspect is Dylan Roof, a deranged racist hell-bent on starting a new civil war. This is evil of the most chaotic and unnecessary sort.

Why did God allow this senseless killing? Why did he not intervene?

Why did he not show up to protect his children as a white bigot gunned them down in a house of prayer?

This question was posed to me by a friend, but we ask this question not just for these people but for all who came before them, the greatest victims of history: the martyrs.

While the world cries out for vengeance, we, the spiritual family of the victims, must lament this loss in a different way. We know that the way of Christ necessitates the most costly sacrifice. This makes our laments as bitter as it is beautiful. Every Christian when they are pulled up from the waters of baptism should know that they have committed themselves to a non-violent witness in the face of the powers and principalities of hate and violence in this world. We cannot give into the same hate the fueled this massacre, and we are oddly moved towards thanks for the martyrs are have shown us so great a witness.

We have a resolve to refuse a heart of vengeance that is predicated on the sobering realization that to long for the punishment of sin, egregious sin, against others is to condemn the sin we excuse in ourselves. However, to answer the question, “Why did God allow this?” I just don’t think the question gets answered with this reminder.

A classical apologist would appeal to how we have free will or that suffering is pedagogical. However, I am of the opinion that human freedom is neither this absolute to the divine prerogative nor this desire for our own.

I am of also of the opinion that tragedies and the question of “why?”  do not get answered in Scripture with reason as we commonly understand it. Reason and logic are parts of the good order of creation. Rationalizing evil is to assign it some of the goodness of reason. However, evil must be understood as an absurdity. It has no reason. It ought not to have a reason. An inexplicable tragedy should probably be left as such: unexplained.

We can say that Christ is with those that suffered. We can say God’s faithful are always prepared to take up their own non-violent crosses as Satan bares his teeth. We know that the way of the cross will prevail, and we pray that the martyrs’ lives will work a witness to effect the redemption of those lost in the darkness of hate similar to that of the perpetrator. We know that there will be a day of judgment and restoration as God loves even the perpetrator. We know this because he loved us while we were his enemy. This disarms our hate, pushing us towards the compassion needed to perhaps bring a bit of that much longed for restoration here in our midst today. However, not all suffering is remedial. An omniscient God does not need to test his subjects for he already knows the answer. God does not require suffering, evil, and tragedy to accomplish his will. All things can be used by divine providence to bring about good, and we sincerely hope that good comes out of this evil, despite this evil. However, if God caused the felix culpa, our original fall or this one, in order to enact our redemption, no matter how spectacular, God is immeasurably wasteful.

To ask “why did God not intervene?” (we circle around this vexing question) is not to occasion a place for atheism either. Atheism is too easy. If God does not exist, the brutality of this life is inconsolably permanent. The only response, no matter how undesirable, will ultimately be a paralysis of acceptance. All condemnation of it is rendered as vacuous as any hope beyond it. If God is dead, the stench of the problem of evil still lingers.

But Scripture never sees moments like this, moments where God seems absent, to be a basis for intellectual disbelief. It is a cause for faithful lament. The words of Scripture offer vocabulary to name the groanings of our saddened souls. It compels and allows us to ask similar questions to what reverberates constantly through the Psalms: “How long O Lord?” or as Christ’s cry on the cross, echoing Psalm 22: “Why have you forsaken me?” Interestingly enough, not even Christ, not even his prayer, was answered during his life. An inexplicable tragedy remained as such: unexplained. Only sin required the solution that meant Christ willingly died for us.

God responded three days later with the resurrection, and we wait on that promise. The Christian philosopher Gabriel Marcel once said that the problem of evil and tragedy is not an intellectual problem to be solved so much as a mystery to be lived. How is it lived? The only way, the only respond to our original question might be to say that we pray, we mourn, we resolve live differently. We commit to solidarity, to compassion, to lament, to justice, to reconciliation, and to hope. May we not be paralyzed with apathy or hate or despair.

We live awaiting the restoration of all things. We live trusting the promise of the resurrection. We live waiting on the crucified God as the Apostle of the persecuted churches of Revelation cried out, “Come Lord Jesus Come!”

We dare not dishonor the victims by speaking easy answers or blaspheme our God by ascribing to him the authorship of evil or condemn ourselves to a broken and brutal reality that is beyond hope of repair.  And so, we do not give an answer, we cup our hands to our mouths in the face of divine mystery and tragedy as Job did. And after this we give a response.

We live this response in the lament-filled space of compassion and prayer.

How long O Lord? How long?