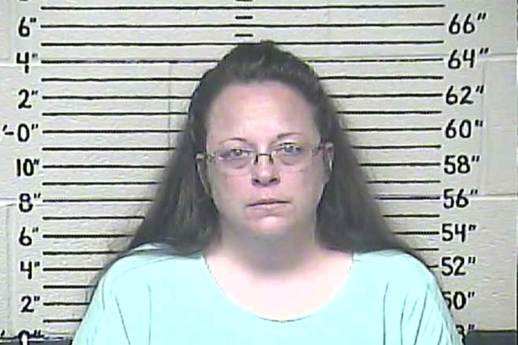 Kim Davis has been getting a lot of air time. Back when her original incarceration occurred, I thought the whole thing was fairly inconsequential. To be honest, Davis gives me the same vibe as people who have bumper stickers that depict a Jesus fish eating a Darwin fish or say “Are you following Jesus this close?” It is not that they aren’t well intentioned people. It is just that I would never hold them up as poster children of Christian witness. Well, tell that to the internet.

Now, tell that to the Pope, who recently met with her, prayed with her, and congratulated her for her courage and her stand for religious freedom. To be honest, the Pope is a classy guy. So, I’m just surprised he dignified this situation with a response like that. Good on him. But is what Kim Davis did really an appropriate way to stand for religious liberty?

So, I will briefly weigh in on the issues around Kim Davis. I admit, I am probably writing about this for the same reason I watch The Bachelor. There is virtually no substance to the story, but I am a big sucker for hoopla, but anyway, here it goes.

Notice that I am saying “conservative Christian.” I say this because I know just as many passionate liberal Christ followers that have a different interpretation and notion of biblical authority from my own. We all need to make our peace with the diversity the Spirit has chosen for Christ’s body. But if you are a liberal, I am asking you to step into the mind of the conservative. Attempt to understand it as you would want conservatives to understand you (I’ll say more about empathy later). From the perspective that homosexuality is against God’s design and that same-sex marriage is not a biblical practice, I would hope that any liberal understands that there are well-intended, open-minded conservative Christians without a drop of homophobia in them. Conservative Christians are just trying to be faithful to what God is showing them.

So, assume this with me, whether you agree with it or not. Now I ask myself, if I was Kim Davis, what would I do? Please don’t make any bracelets. It is purely hypothetical. It means what would I do in her employed position, so I am not saying literally her – although I will admit to staring at myself in the mirror and wondering: what would it be like to have Kim Davis’ hair?…Anyhow, I digress. What would I do?

I would frankly resign or ask to be laid off. That I think would be the appropriate response if I was in a line of work I did not morally agree with. You cannot be a pacifist and a soldier and just refuse to fire your gun. You cannot be a doctor and work at Planned Parenthood and expect to be paid but never do an abortion. You cannot be a Jehovah’s Witness and be a nurse at a blood donor clinic, refusing to take anyone’s blood. If you do not morally agree with the line of work, don’t do it, much less expect to be paid for doing less work than others.

If you feel obliged not to bake a cake for a gay couple, then you have chosen not to get any money from them. That’s fair. That’s religious liberty and its consequences. We all have the right to act as our conscience dictates. Unless you are Maria Antoinette, withholding cake is not oppressive. However, let’s remember that Kim Davis did not get imprisoned for having an opinion. This is not about religious liberty or free speech in many ways. She got in trouble with the law because she refused to do the legal duty she was hired for. If you don’t believe in the power of the State as something legitimate yet separate from the church, then do what the Mennonites did. Don’t be selective. Demanding the same pay for less work is turning religious rights and freedoms into religious privileges. Again, if you don’t agree with the line of work, the better witness is to resign.

But whether it is issuing a marriage license, baking a cake, or promoting a employee, I fear there is a persistent hypocrisy on the part of these Christians. Licenses were undoubtedly issued, cakes were unwittingly baked, and promotions blindly awarded for heterosexual adulterers of far worse sorts. Where was the integrity of conscience there? Theses events show that conservatives don’t just let us all be sinners equally, but unevenly see LGTBQ individuals as the worse form of sinner. Many conservatives Christians I know don’t just see homosexuality as sin like it is a sin to smoke or work on Sundays. Gay people disgust them. They are a political threat. They are the scapegoat of the church’s dwindling power. It is so much so that far more than all the other sin and injustices out there (including and especially injustices done by the faithful), these Christians see that their professions, in their minds, must be made into soapboxes of condemnation. Hypocrites full of condemnation…Jesus had a few choice words for people like that.

But back the truck up. I have gotten a head of myself. Allow me to compose myself again…

There is an overlooked question here. We have missed something. It is this: can I support without morally affirming? That is the question. It is the distinction that was never made. Kim Davis thought that issuing same-sex licenses means she is 100% agreeing theologically with same-sex marriage. Is that really the case?

By that same logic countless gay youth have been pushed out onto the streets because their conservative parents, in their mind, have been lead to believe that if they materially support their openly gay child they are actually affirming something their convictions condemn. Of course, they continue to delude themselves when they think that if they abandon them, a gay child will obviously then see the love of Jesus. Somehow they think these things logically follow.

Same with the person that refuses to bake a cake or a business that refuse promotions.

The next question is the shocker: Does the Bible actually offer a pattern where support is possible without affirmation? Like many debates in evangelicalism, authentic biblical zeal is dangerously mixed with biblical illiteracy, concocting a cocktail of well-intended bigotry. As the Baptist theologian James McClendon used to say, the problem with fundamentalism is that it is not fundamental enough.

Let us look at the example of men serving unethical governments.

(1) Joseph served the self-proclaimed god, Pharaoh, enabling Egypt to become even more of an idolatrous superpower.

(3) Daniel served the oppressor of his people, Nebuchadnezzar (who also claimed deity for himself). It is not that he lacked conviction. When told not to pray, he still did. When his friends were told to bow down to a statue, they did not.

Let’s move on to Jesus…

(4) Jesus performed a miracles for a centurion’s household, healing his servant boy (moreover, some suggest the boy may have been his pederast). He could have told the centurion, “Well that is what you get for occupying land that is not yours. Go home!” He could have inquired into whether there was a pederast relationship between him and the boy. Whether that is the most obvious interpretation or not, the point is Jesus did not ask. He served.

(5) Jesus miraculously made more wine even when people were getting well sauced at a wedding. While the point of that sign is not promotion of drinking (it was the arrival of the “new wine” of the new covenant), Jesus nevertheless made a great bartender.

In each of these examples, the person could have been seen as complicit in helping someone do something sinful: helping the political enemy of the people of God, not to mention enabling idolatry, or worse, even using drunkenness as a grand stand for a kingdom sign. Yet for various purposes, they did so. Joseph and Daniel out of virtue; David out of necessity; Jesus out of compassion and prophesy, etc. All these examples are, of course, dissimilar from the present one in various ways, but I think the point remains:

Christians should have the freedom not to support what they think is sinful. However they are called to serve sinners and service need not be seen as affirmation. Serving others is an act of good witness.

The public sphere is not the church. The fight for political rights are not the same as Christian witness. They overlap some, but they are not the same. Christians would be wise to remember that.

The public sphere is a place where not all agree, and it is the job of the government to regulate relationships to promote common good and common well-being.

Would a Christian want an atheist business to refuse promotions under the notion that they can’t promote someone they thing is deluded? How would a church feel if a company refused to sell them communion cups? Or an atheist government clerk refusing to send charitable status paperwork or ordination papers out of their defiled conscience?

In a world exploding with differences, Christians can have a faithful political witness by merely promoting empathy, honesty, and fairness: something that will work fair better at creating a bottom line of common good and decency than any Constantinian strategy will ever do.

I am going to preach to you now. God’s Word addresses us today afresh as it has for thousands of years:

“The only thing that counts is faith expressing itself through love…You, my brothers and sisters, were called to be free. But do not use your freedom to indulge the flesh; rather, serve one another humbly in love. For the entire law is fulfilled in keeping this one command: ‘Love your neighbor as yourself.’ If you bite and devour each other, watch out or you will be destroyed by each other.“ (Galatians 5:6, 13-15).