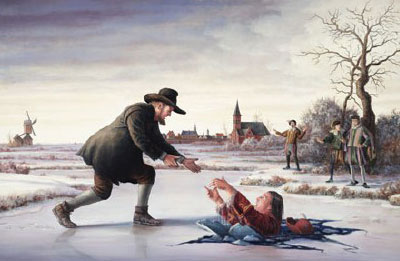 Like good Protestants, but bad students of church history, we are going to have to jump 1500 years into the future, to the dawn of the Reformation. In this room here, I imagine we have Christians from different denominational backgrounds like Lutheran, Presbyterian, Reformed, Mennonite, Pentecostal, even some Catholics as well. And some of you even know what those words mean! Those words tend to mean less today not just because we don’t know our church history, but also I think because we have a deeper recognition that we are all one in Christ Jesus, despite minor doctrinal differences in how we interpret our Bibles. It was not always so…

The first Baptists, called by their enemies, the “Anabaptists,” were radical Protestants that saw all the wars of religion, killing between Protestants and Catholics, and the concluded that faith has to be free and voluntary. They were committed to non-violence and refused to let the government legislate religious belief one way or another. This is what Baptist call the separation of church and state – more accurately it is the separation of faith from power.

Again, most Christians now affirm this in one way, shape, or form, but back then, the Baptists who preached freedom of religion and conscience, something we take for granted now as our un-revocable right as a citizen. However, back then, they were deemed enemies of the common good by the established churches and their governments, both Protestant and Roman Catholic. And so, authorities hunted the Anabaptists. This was a dark moment in European history, Catholics killing Protestants, vice versa, Protestants killing Protestants. Christians who all believed in the same Jesus, executing other Christians. What were they killing over?

Baptists held to believer baptism, Reformers and Catholics to infant baptism. In hind sight that is a terrible thing to fight over, let alone kill. It was petty. Yet, where state-religions were strong, so also was the need to control people to get them to believe, and so the Anabaptists, who dissented from this, were chased. Their punishment: they were often dragged to bridges and lakes and flung into the water to drown as a kind of ironic punishment for being re-baptized.

One man was arrested by the Dutch authorities for his Baptist convictions. His name was Dirk Willems, and he was imprisoned purely for saying he no longer believed what other Christians of his day believed. He never hurt anyone. The accounts say that he managed to escape the prison, slipping out of an unbarred window. It was winter time, and so, in order to evade his pursuer, he ran arose a frozen lake neighboring to the prison.

The guard chasing him, being a bigger man, fell through the ice. Dirk was home free. But then he stopped. What would Jesus do? His conscience pricked him, and he was moved with compassion on his persecutor. At great risk to himself, he dragged the man out of the icy water, warming him with his own body heat. Dirk carried the man back to the prison, accepting that if he retuned, he would be re-arrested. Sure enough, some prison guards did not care about his very obvious compassion and bravery, let alone the injustice of his charges to begin with, and sent him back to his cell.

For being a Baptist heretic and because he refused to let his own enemy die rather than escaping, Willems was burned at the stake 16 May 1569.

Can you imagine his thoughts? Turning to save the man that would imprison him, knowing that it mean confronting prison and the death penalty?

It seems difficult to imagine, but that is what Jesus did for us. While we were still sinners [still his enemy], Christ died for us.

Father, we pray for Christian unity, as Jesus prayed “May they be one as we are one.” Empower us to end our petty squabbles and focus more on you. Remind us that the only way we will show the world your son is by having the same reconciling love Willems modeled for his own pursuer. You teach us to love our neighbors as our selves and may we love even our enemies the way Christ loved us, counting their lives more important that our own.