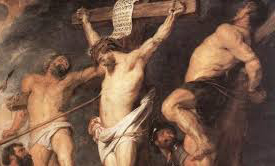 Our world is a world that has closed itself off from the transcendent. We have bought into the discourses of science that tells us the immediately tangible is all there is, everything else is suspected as superstition.

Do not get me wrong, science has earned its place in the world, and many need to listen to its voice more. Science has offered enormous explanatory power for our worldview. In the great feuds between scriptural literalism and science, science will usually win. We have found the sun does not revolve around the earth, that the earth is much older than chronicled, that rain comes from weather systems, illness from poor hygiene, etc.

The world has pushed God out of its purview. God has been viewed as too burdensome a notion to trust.

The events of the primordial church fade into the distance of history. History, itself, seems to crocked a path to see providence. Divine intervention seems like misconstrued co-incidence. Many of the great political advances have been done despite religious influences.

Our daily lives, even for many Christians, are often practically atheist. Church becomes an cumbersome ritual. Work is more important than worship. Singing praise to God does not feed a family. Prayer and Scripture reading get sidelined to more relaxing practices: Television, sports, etc. So, we say to ourselves, why bother believe?

However, we deceive ourselves into thinking the modern world was the first to discover doubt, as if doubt was an invention by the same brilliance that discovered flight, electricity, or the theory of relativity. Yet, doubt is not a modern novelty.

The cross was a scary time for Jesus and his followers. The cosmos, let alone their little band of disciples, hung in the balance. The circumstances had become so chancy that most of the disciples deserted Jesus: belief in this man as the messiah was simply too insecure at that moment. Peter initially drew his weapon to defend his lord, but upon realization that violence was not going to resolve the conflict between Christ and the priests, upon seeing his master taken rather than fighting back, unleashing the kingdom of power that he was expecting him to unleash, Peter himself turned to deny Christ, three times in fact. Other disciples deserted him far sooner, unfortunately.

Thus, there Christ hung, condemned, and by all accounts at that very moment, defeated and disproved. Jesus as messiah was no longer a tenable conviction anymore. He did not seem to be bringing in a new kingdom, as prophesied. He did not defeat the Roman occupation, as prophesied. Far from! There he was pathetic, disheveled, beaten into irrevocable submission to the powers he should have pulverized with legions of the faithful, perhaps having even angel armies come to assist. Thus, Pilate, either out of mockery to the Jewish people or out of some deep seated pious guilt over killing a truly innocent man, wrote “King of the Jews” and hung it over Jesus’ head.

If one was to look for a reason to believe in Christ at that moment, one would have looked in vain. The man on the cross was exposed many times over as just a man, flesh and blood, ashes and dust, rejected by his people, betrayed by his closest followers and friends, accused of blasphemy by his own religion’s authorities, tortured and in the midst of his execution by his people’s most hated enemies, the most idolatrous power in existence, hanging there, slowly bleeding out, slowly succumbing to his wounds, to thirst, and to death.

Atheism’s objections pale in comparison to the scandal of Good Friday.

As onlookers mocked and jeered, even a man, a wretched thief, dying the same death as Christ next to him, felt no solidarity with the co-condemned, no compassion for his neighbor in this death, only cynicism and despair. Even the thief on Jesus’ one side mocked him.

At this moment, there seems to be no good reason to trust Jesus. Jesus hung there, discredited.

Would you have believed that Jesus was the messiah then? I know I probably would not have. Sadly, that is because I am a “reasonable” person.

More sadly, is that the only reasonable people in this story are monsters: Judas, who calculates how to profit from Jesus’ arrest; the Pharisees, who have the foresight to plan against possible agitators; the Romans, who brilliantly invented means of rebellion suppression.

And yet, in this moment of darkness and doubt, despair and destruction, one person believed! One person dared to see something more. One person had faith. The other thief, what tradition refers to as the “penitent thief,” dying at Jesus’ side. He believed. He had nothing left to hold back. He could have mocked like the other thief, but he didn’t.

We know next to nothing about this person. The Gospels left him unnamed. Having no hope left in this world, he still says to the other thief, “Do you not fear God? You are under the same punishment.” He admits that his punishment is just, yet Christ’s is not. Christ is innocent and he is not.

At the very end of his life, he is moved with humility and honesty.

But his confession is more radical than that. If one was worried about self-preservation, they would have petitioned far more prestigious powers than a dying messiah.

This man had perhaps the greatest faith in all history, and yet we do not know his name! But God does. God is not dead because God did not stay dead.

Jesus did promise to remember him. In fact, this man, in his final moments of life, was given the most definitive assurance anyone had before the resurrection: Jesus turned to the man and said, “Today, I truly tell you, you will be with me in paradise.”

Sadly, it is only when we realize that our lives stand on the edge of oblivion that we can feel assured that our lives are in the hands of something more absolute than what this world offers.

Help us to have even just a fraction of the faith this man had.

We complain about our lot in life, yet we are unwilling to admit our faults.

We so often mock and mistrust your salvation. When we do that, we must acknowledge that our punishment, like his is just.

But we must also cling to the hope of your kingdom of forgiveness.

Remember us Lord Jesus, as you remembered him.

May your kingdom come.